Futaba District is located within the Pacific Ocean coastal area of Fukushima Prefecture called Hamadori. The district is composed of the six towns of Hirono, Naraha, Tomioka, Okuma,Futaba and Namie along with the two villages of Kawauchi and  Katsurao.
Facing the Pacific Ocean and blessed with a mild climate, the district’s primary industries were fishing and farming. The district has also established itself as Japan’s primary energy supplier. It was the northern end of the Joban Coalfield during the pre-WWII period, and it became the host to a number of Tokyo Electric Power Company’s (TEPCO) electric power plants in the post-war period. 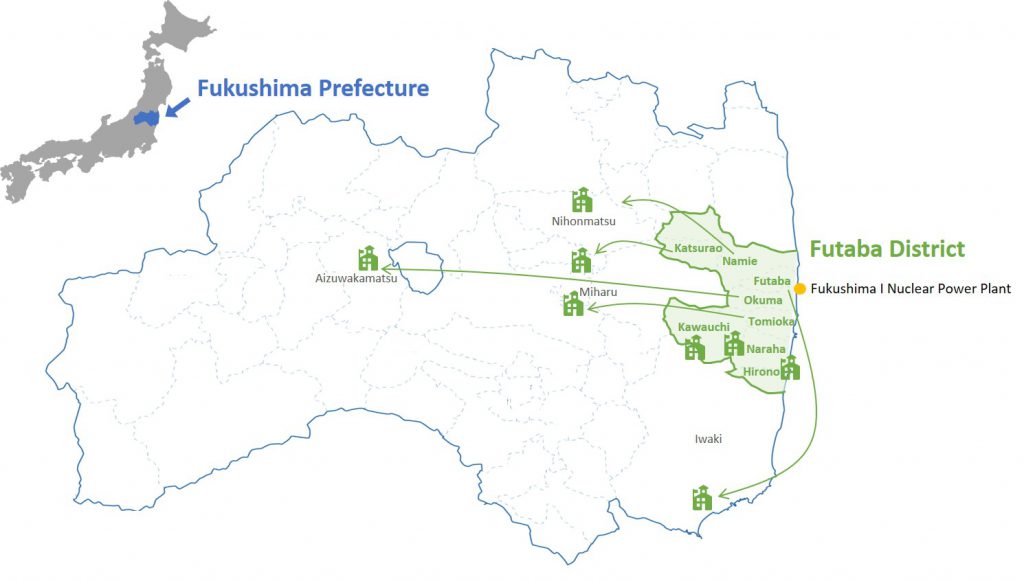 In the wake of the Great East Japan Earthquake and the nuclear accident at TEPCO Fukushima Daiichi Nuclear Power Station on March 11, 2011, all the municipalities temporarily evacuated the Futaba District. As a result, many civilians faced dramatic changes in their daily lives, such as moving to evacuation sites outside of Fukushima Prefecture. This led to some children missing school and/or transferring schools every time their family relocated evacuation sites.
As of December 2015, two towns (Hirono and Naraha) and one village (Kawauchi) returned and revitalized their administrative functions, while the rest of the towns (Tomioka, Okuma, Futaba, and Namie) and the village of  Katsurao relocated their administrative functions outside of their local districts. (Normally in Japan, local municipalities are based within their geographic boundaries so the current situation in Futaba District is a rare case.)

➡NEXT  The 3.11 disaster and schools in Futaba